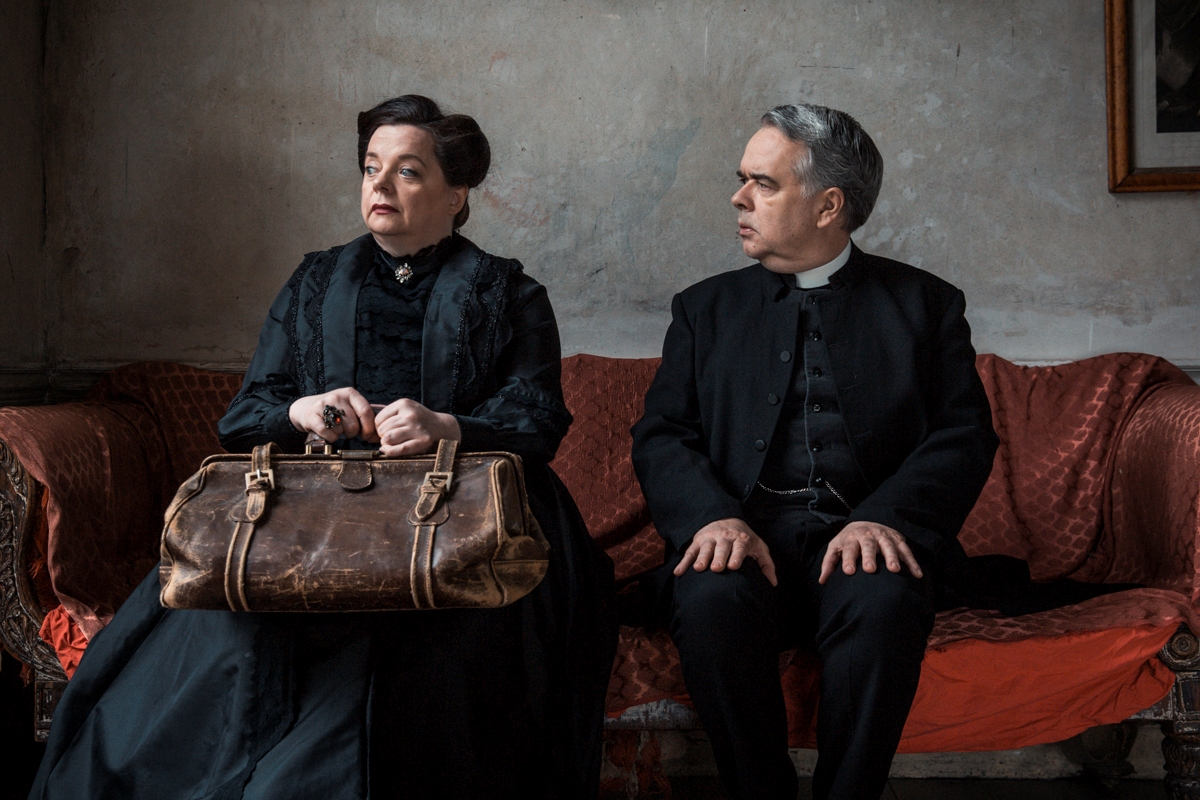 “To Hell in a Handbag: The Secret Lives of Canon Chasuble and Miss Prism” written and performed by Helen Norton & Jonathan White returns to Bewley’s Café Theatre this summer. It will also be seen at the John Hewitt International Summer School in Armagh and the GAP Arts Festival in County Wexford.

Hailed by the Observer as a ’comic gem‘ and ’a hoot of an instant classic‘, the play’s action runs in parallel to Oscar Wilde’s The Importance of Being Earnest and follows two of that play’s minor characters – a country rector and a governess – as their lives of Victorian propriety unravel in a tale of blackmail, embezzlement and false identity, a subversively funny new take on an Irish comedy classic.

Since it was last seen in Bewley’s in July 2017, the production has played a sell-out run at the Edinburgh Fringe and subsequently toured all over Ireland. Last November, it had a hugely successful tour of southern England, supported by Culture Ireland as part of its GB18 initiative. Among the places visited was Worthing, the seaside town where Wilde actually wrote the original play.

The production received four- and five-star reviews along the way. The Sunday Independent called it ‘Wickedly, side-splittingly funny, in a sophisticated, witty and elegant way… a joyous romp not to be missed, a worthy homage to its master and progenitor ‘. The Mail on Sunday said ’To Hell in a Handbag is a delight – beautifully written and acted with exquisite comic timing.’

The writer-performers have been very busy with other projects too. Helen Norton (Fair City) has just finished a lengthy national tour of Furniture by Sonya Kelly (Druid) and is currently appearing in The Unmanageable Sisters by Deirdre Kinahan at the Abbey. Meanwhile Jonathan White (Father Ted) has just finished a tour of Colin Murphy’s Haughey|Gregory for Fishamble.

To Hell in a Handbag begins its summer run with a performance at the Market Place Theatre, Armagh on Tuesday, July 23rd as part of the John Hewitt International Summer School. It will then be seen at the GAP Arts Festival in Ballythomas, Co. Wexford for two performance on Friday, August 9th and Saturday, August 10th. And then it moves to Bewley’s Café Theatre for four weeks of lunchtime performances beginning on Monday, August 12th.

For more information contact 2hellinahandbag@gmail.com or the individual venues